When Henry Ford launched the Model T Ford, he famously said customers could have it any colour they wanted as long as it was black. By keeping variations to a minimum, he realised he could keep costs down and sell more cars. He obviously knew what he was talking about as the orders came flooding in and he sold 15 million Model Ts.

Today, Dennis Eagle’s order books are also bulging, yet customers have a lot more colours to choose from. Wouldn’t it be better to paint them all black too?

You have to excuse him. He’s a lifelong Aston Villa fan as well as a Dennis Eagle stalwart who’s spearheaded numerous changes in our paint operations, leading to what he believes is the best paint job on the market. In a minute, he’ll back that up but first, meet JJ, as he’s widely known. The ultimate Brummie.

“I was born in Great Barr which, for anyone who doesn’t know Birmingham well, is on the north-west fringe of the city. I first started working for Dennis-Eagle in 2000 at their Aldridge Service Centre, a few miles north of Birmingham.

“We did the refinishing, working on all sorts of vehicles – from fire engines to refuse collection trucks – and we were turning out about 18 units a week, which was pretty good at the time.

“In fact, it was only going to be a year’s work when we originally started but we were that good at what we were doing that they gave us more and it went on and on, lasting for around 10 years in the end. At that point, in 2010, they asked me to come over to the Warwick factory to help set up a new paint facility and the project ‘M’ team was started. 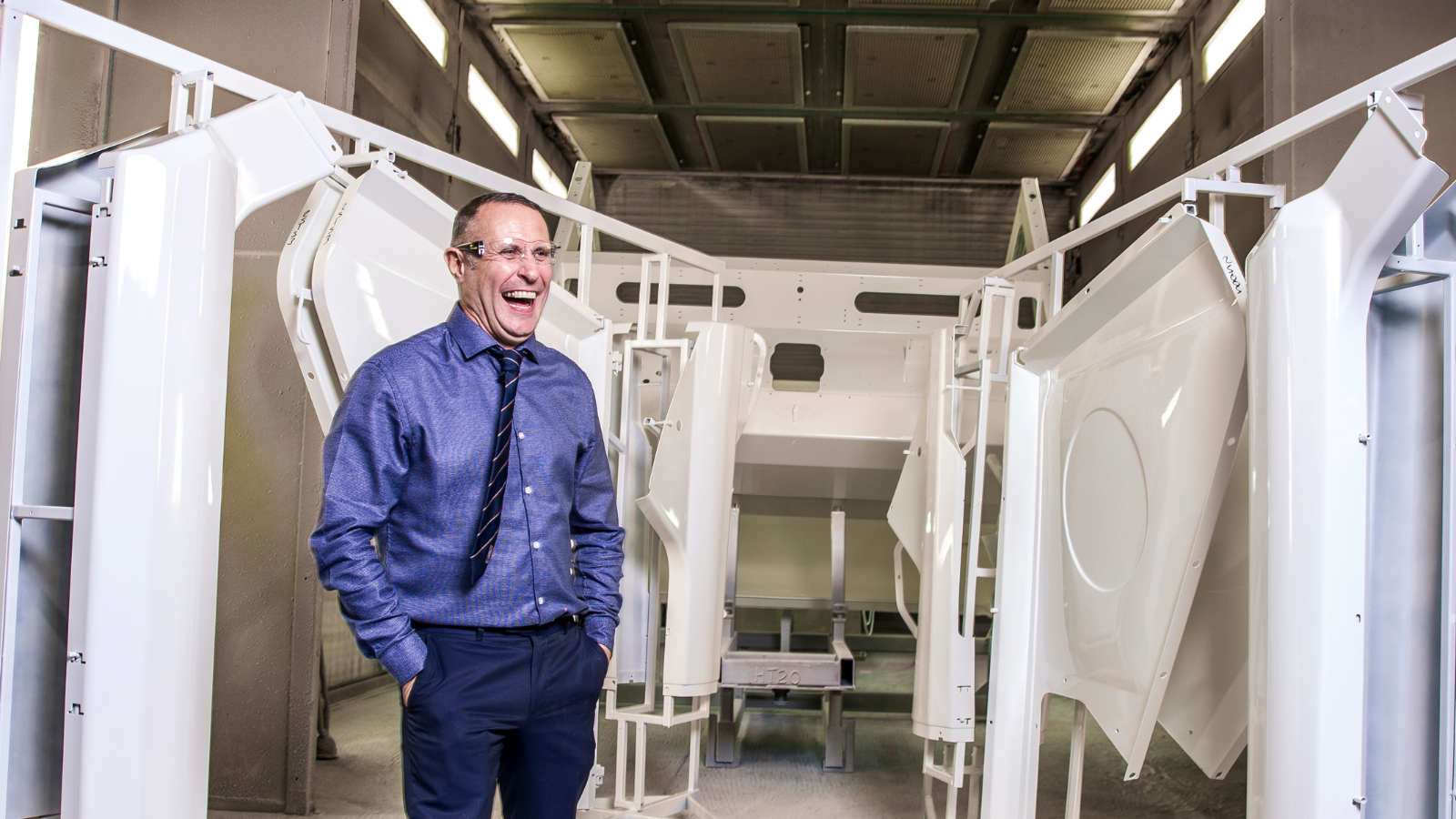 “Today, I still live in Great Barr – not far from where my dad lived, on the same road.” And it’s just 15 minutes up the A34 from Villa Park. Is that a coincidence?

“I do love my football,” he confessed. “I always have done. It’s the competition, the excitement and – with Villa – the sense of belonging to one big family.

“It does come second to my own family, of course – though they might dispute that on occasions. I have a wife and three daughters. And my dad, who passed away five years ago, was my hero. He was a service manager – known as ‘The Legend’ – and he was actually my boss for a while!

And there’s another side to JJ you need to know: the entrepreneur. Buying and selling, mainly on eBay these days. “I love it,” he explained.

“I used to restore and sell old pedal cars but eBay’s the real hobby now. I did a course at work a few months back and had to prepare a PowerPoint presentation for it; I chose to do mine on buying and selling on eBay.”

So, we have the family man, the Villa fan, the entrepreneur … but what does all this have to do with painting RCVs?

“In 2010, Dennis Eagle decided the time was right to step up their painting operations,” explained JJ.

“The challenge for me is to be the best, to do the best I can and then to find ways of doing it even better.”

“Paint and paint application technology had progressed – the quality of finishes, the durability and protection it offered had steadily improved over the years. The company obviously needed to keep up to date but to get the best results from modern paints and technology, they needed a shotblasting facility.”

Shot-blasting cleans the metal at a microscopic level and provides the best surface – or “substrate” as the paint industry calls it – for the paint to bind to. At Dennis Eagle, surfaces to be painted are shotblasted to a recognised standard, called SA 2.5. Dennis Eagle had not had that kind of facility at Warwick in the past, partly because there had never been enough room for one. But in 2010 the company decided it had to find room for one as paint was becoming increasingly important to the overall quality of the finished product and customer satisfaction.

“I came to the Warwick site in August 2010 and set up the new facility from scratch with the project ‘M’ team, starting off with a few trials to get it right and then introducing shot-blasting into the full production process,” explained JJ.

“The technical side of things all went very well but, as it turned out, there was much more to it than that, a lot of careful managing to get everyone working in the same way. It was a big change for some of them, but I love change.

“The challenge for me is to be the best, to do the best I can and then to find ways of doing it even better. I really want this paint operation to be the best in the industry and I do take it personally – and so does the company. And to achieve that, to continue to improve, you’ve got to embrace change.

“We work very closely with our paint suppliers Granlyn. They keep an eye on what’s changing in the market and between us we have a go at changing the way we do things or the paints we use. It’s all about improving.”

But the challenges of managing the paint division were significant, as JJ recalls. “Going back to the new facility, the lads I brought here from Aldridge were all highly skilled and worked really hard. They were focused and had the same outlook as I did because that had been the culture where we’d worked before: do the very best you can.

“Some of the others we employed needed to learn new skills and we had to do a lot of retraining before I could get them all pulling together in the right direction. Now, we’ve all got the same high standards and the same outlook.

“And I really do believe we are the best team in the company.”
JJ also had to set up new processes in the Blackpool factory where the company assembles its cabs – the chassis, bodies, hoppers and Beta 2 bin lifts are all made in Warwick.

“There were a lot of changes that we wanted to make in Blackpool too, but people said it could never be done,” said JJ.

“My colleague Craig Williams was integral to the whole operation and together – with the help and support of others – we did make them. Very successfully.

“What we introduced was single line production, which is more efficient and easier to manage. The single-line flow means you have a specific amount of time to do your job before passing the product on to the next person.

“It’s a system tried and tested in all sorts of manufacturing processes, and it has worked very well for us.” Now, he says, the quality of the painted product has never been higher. The company offers a large range of colours. All the paints used are “twin-packs” incorporating a paint and a hardener. The brand used by Dennis Eagle is Glasurit, made by BASF. And every paint job is checked. Again, and again.

“When something here is painted, we have to achieve 100 microns of paint,” said JJ.

“We run checks all the way using elcometers, special gauges designed to accurately measure the DFT – that’s the dry film thickness – of paint. Then, when the vehicle gets its pre-delivery inspection – its ‘PDI’ – our work is checked again.

“I’m certain ours is the best paint job in the market and we get plenty of comments to that effect. We also get very few complaints from customers."

But success in the factory, of course, breeds success in the marketplace and this in turn created new pressures to improve efficiency once again so that production could keep up with demand.

“It was clear that things were going very well for Dennis Eagle as a company, and I felt really proud to be part of it and to have contributed to that success. But I knew that it meant the next challenge was going to be just around the corner.”

“Five years ago, we were painting 19 vehicles in four days in our division, and they said they wanted to do 24 in four days. So, I went away, scratched my head and thought about it.”

Time for another change, he decided. “I called the lads in – the co-ordinators – and we sat down and talked about it. I had an idea of what we could do but I wanted their input on it. We’re a team and I value every one of them. We all get on very well together and everyone pulls together. So, when it comes to changes, if we make them together, they’ll work because, collectively, we’ll make them work.

“What we proposed this time was to split the single line production. The result is, we now have a hopper line and a body line so we can paint two hoppers and two bodies at once. To be able to do this, we needed more space and a second booth, but we got that by moving the chassis painting to what everyone at Warwick calls Unit 2.

“We made the move in July 2017 and kicked off with 24 vehicles in the first four days. The change was, once again, a big success.”

So, an awkward question here: if change is a vital ingredient of success, how long can Dennis Eagle count on JJ being here? Or, to put it another way, like Lee Marvin in Paint Your Wagon [pardon the pun!], was JJ also born under a wandering star?

“Well, I do get approached but I’m happy here and respected,” said JJ.

“I want my team to provide the best paintwork in the industry and I want be part of the best business in the industry. And here – at Dennis Eagle – I am. And since joining up with Terberg, we’ve progressed even further. It’s made our business even stronger.

“There are 32 people working in the paint division and we are a great team. My boss, Terry New, gives me the reins and supports me 100 per cent. It is the best company I’ve ever worked for. It’s like a family business, only massive.”

A couple of strong themes have emerged here, themes that run through both work and play. There’s the entrepreneurial spirit, always eager to try something new, to improve, to do better, to grow, the need to construct, to make something, like so many Brummies before him.

Then there’s family, be it the paint division team, the whole Dennis Eagle workforce, the Villa or, of course, his own kith and kin. Strong bonds, familiarity, mutual support, identity, and the feeling of belonging to a strong group. These are the hallmarks of family.

And, in a nutshell, these are the qualities that make JJ … well, JJ.